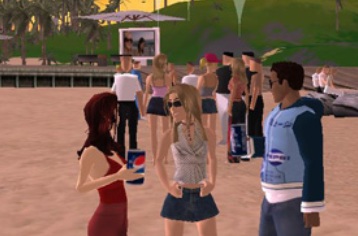 As I sit here in my kitchen looking for a job, my daughter Tyler and her friend have the big HP notebook fired up and pointed at Disney’s Virtual Magic Kingdom. Tyler, who just entered her teen years, has been playing around in virtual worlds for a few years now. She has as many friends in these communities as she does in real life and she is not alone. Millions of younger kids are spending significant time in virtual worlds like Disney’s Toontown, VMK, Club Penguin, Webkinz and Whyville. The market for “safe” teen social sites and virtual worlds continues to grow as well with MTVs virtual worlds, There.com, Doppelganger and others.

According to a recent study, 71 percent of tweens and teens between the ages of 9 and 17 visit social/virtual world sites weekly. There isn’t a clear tally of the virtual world population, but the number of registered users for kids and teen worlds is growing. From the study:

Urban teen environment Doppelganger has nearly 150,000 registered members, while PG-13 site There.com has 1 million members, 70 percent of whom are between the ages of 13 and 26. Self-described “edutainment” site for tweens, Whyville, has 2.3 million users.

As has been pointed out in numerous studies, many kids are watching less television, preferring instead to spend time on the internet. In the last week alone, my daugher has watched maybe 6 hours of TV, but has spent three times that much time on YouTube, VMK and other social sites. I’m beginning to think the computer is somehow physically attached to her as she takes it everwhere.

Over at ClickZ, Matthew Nelson published a good article last month which discusses the the marketing landscape in youth oriented virtual worlds. He points out that in the PG-13 worlds, marketers are quite active in promoting specific items that appeal to todays teens (clothing, music, electronics). The challenge here is to find ways to engage them. As Nelson points out, this audience has been the target of sophisticated campaigns since they were babies. They recognize when they are being marketed to and will simply ingnore the message if it doesn’t add value to them.

To appeal to teens, advertisers and virtual worlds often team-up around themes that are clear fits, such as music, entertainment, clothing and electronics, but marketers need to engage their audience to keep them coming back. Recently, There.com signed an agreement with Capitol Music Group to bring music artists into its world, and created a series of virtual nightclubs for them to play in. More than that, users will be able to watch videos and interact with band members.

“The artists are realizing they need to be more involved with their market,” said Michael Wilson, CEO of There. “And this is a more efficient way to meet a fan, to change the engagement with them from a few moments to minutes.”

Nelson points out that there has been conscious decision among the young kid oriented sites to disallow all in-world advertising, but that’s not to say that the sites themselves aren’t powerful marketing vehicles for the brands that own them. The point of sites like Nicktropolis, Toontown & VMK is to get kids to interact and engage with the brand. Spend any time in VMK and you will see all kinds of in-world ad for Disney properties.

Youth Are Receptive to Marketers IF….

A recent study conducted by Grunwald Associates found that kids (9 to 17-year olds) are not only spending significant time in social sites, but are willing to engage with advertisers in those spaces is they are approached in the right way (i.e. must be relevant and perceived as adding value).

Do you have some examples to share (good or bad)? What are the big pitfalls of marketing to youth through these channels.

10 thoughts on “Marketing to Youth in Social/Virtual Worlds”