Radio Shack is testing a new store model under the name PointMobl.  The three test stores in the Dallas area focus on “mobile” categories ranging from compact laptops and MP3 players to smart phones and GPS systems.

The depth of selection is greater than what a typical RadioShack store carries and there is no reference to the parent company to be found anywhere in the store or on the PointMobl website which lists the copyright owner as being “PointMobl Corporation”.

That last point is a very smart move which clearly shows Radio Shack understands where the brand sits in the minds of their target PointMobl customer.  I’m making an assumption here that they are trying to appeal to upscale, tech-savvy customers in the 18 – 35 year old range based on the store description and the images shown on the website.   Taking this “anonymous” approach removes one barrier to acceptance by those target customers.  On the other hand, the way they pitch the concept on the website sounds like the typical safe, boring nonsense that I sometimes hear coming from corporate marketing departments trying to appeal to a much broader and older segment:

“It’s time to let your mobile life out to play.  Give your productivity a power-up, stay connected, and take your inner rockstar on a world tour.  It’s time for a true mobile outfitter. One who really listens to your needs, then leads you to the right solution.”

Blech! If you are 18 – 35, chances are you are already leading a “mobile life”, you are always connected,  and when it comes to figuring out what gear you need, you do your own research because experience has shown that you usually understand the technology and the options better than the salespeople.  The rest of the copy on the site doesn’t get much better.  I should also point out that the website has at least one typographical error where they proclaim “You don’t need another mobile store – you need a good listener“.  Come on guys, any spellchecker program would have found that.

Some analysts have expressed concern about testing new store concepts under the current economic conditions.  I think Radio Shack has no choice but to explore alternatives given that a third of their existing store revenue comes from mobile sales and that business is being eroded by the likes of Best Buy who has opened their own chain of mobile specialty stores and expanded the mobile departments in over 900 of their superstores.  Radio Shack is also losing business to the mobile carriers which continue to pop up like weeds in every stripmall nationwide.  RadioShack has 6,000 company-operated and franchise stores and 700 wireless phone kiosks.  That gives them easy access to real estate that would be retrofitted into PointMobl outlets.  A slideshow of images from one of the test stores is available on YouTube:

This approach could end up generating higher revenue per square foot  than existing Radio Shack stores.  I’m fairly certain that is one of the test criteria and if the test proves this out, an expansion of the PointMobl concept could boost the chains revenue for a few years.  While that idea seems appealing, I don’t see it is a differentiated strategy that can be defended over the long term.  There’s nothing special here.

The stores are described has being “upscale” with white fixtures and clean glass, but based on the following slide show, the interior of the store doesn’t generate that Apple store feel that I’m sure they were going for.  Instead it looks cramped and dark.  In some places, the dramatic lighting makes it seem almost museum-like; not the kind of feel that invites you to pick up the stuff and interact with it.

The mobile carriers all have significant presence in this size footprint and it would be extremely easy for them to expand their product offerings to include a similar product mix.  The only real differentiation here might be in the ability to offer multiple mobile carriers in one store, but that’s not unique either considering Best Buy’s strong position in the market and the growing presence of mass merchants like Walmart and Target in the mobile space.

In order for PointMobl to really be sustainable, it must be able to offer the customer an experience that no one else can.  I just don’t see that happening with categories that are already commodities.

As the popularity of Social Media has risen over the last couple of years, so has the assertion from some  “experts” looking to sell their “expertise” that organizations must start using these tools or be left in the dust.  Of course, real value of Social Media has been much more difficult to demonstrate using traditional ROI approaches and, as with most emerging technologies, once touted concepts as Corporate Blogs, Public Virtual Worlds and the universal catch-all term “Web2.0” find themselves smack dab in the Trough of Disillusionment.  Newer technological innovations like Microblogging Platforms (eg. Twitter) can also be found in Gartner’s 2008 Hype Cycle.  As they are newer on the scene, they appear to be around the “Peak of Inflated Expectations”.  If you’ve spent any time listening to the Social Media “guru’s” on Twitter, you’ll probably agree with that assessment which means the Trough of Disillusionment can’t be far behind.

Companies are flocking to Twitter to “engage with their customers”, often with the same mixed or difficult to demonstrate results as with earlier attempts.  A Social Media strategy is not going to be effective for every organization and many simply don’t understand how to approach it.  One area that seems to be a natural fit for these communities is Social Causes.

Perhaps it’s a perfect storm of changing attitudes and technology adoption, but it seems to me that there have been some very newsworthy examples of people helping people through Social Media in the last few months.

Some of these have been focused on a single individual or family while others are much broader in scope. Either way, they have succeeded by leveraging relationships between real people and that seem like the biggest takeaway for other organizations.  Just as these communities are coming together to help others, the degree to which you show your “Social Generosity” will be the biggest factor in how your organization is is embraced by these social communities.

What does failure mean to you?  Chances are the first thing 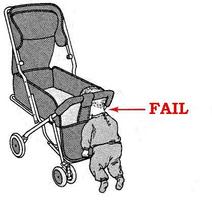 you think of isn’t good.  Standard definitions of failure include “omission of occurrence or performance” and “a lack of success”. Great twentieth failures include disasters like the space shuttle Challenger, Chernobyl and the Titanic. Lately, the expression “FAIL” has increasingly become the way to sum up almost any bad situation in a single syllable (an epic fail in my opinion).

In many corners of the business world, failure is not rewarded or encouraged.  Failure can be expensive and if not managed, can damage a company’s reputation.  It doesn’t support the short term, high performance expectations of the average publicly traded company.  Of course, if you are an above average organization; one that has established a reputation as an innovative leader, failure is likely a valuable and necessary component of your continued success.

To most people,  the name “Honda” probably suggests “cars”, but at it’s core, Honda is an engine company.  Their engines drive cars, motorcycles, lawn equipment, watercraft, and jets (yes jets).  They are also the only provider of engines to the Indy Racing League, but that honor was only achieved through some spectacular failures.  Honda is one of those innovative companies that understands the importance of failing and learning from it.  It’s baked into their culture.  This company-produced film gives us an open and honest look at some failures from Honda drivers, designers and engineers and how they draw upon failure to motivate them to succeed.

So,  do you view failure as an omission or an opportunity?

“If I didn’t fall down from time to time I’d never learn” – Ki Theory: Holiday Heart