An recent article written by Jen Zingsheim at Media Bullseye takes aim at the Social Media “experts” who overpromise the value and underestimate the ability to scale.  Several well documented examples of companies using Social Media (Twitter specifically) to monitor for and address customer service issues have many in the social media echo chamber (myself included) urging other companies to “join the conversation”.  And they should because social media provide a low-cost way for companies to learn from their customers and address their issues.

It’s the latter of these two which Zingsheim says isn’t scalable.  In the long run, it probably isn’t, assuming the objective is to respond to every customer individually AND assuming that the company doesn’t make significant Customer Experience improvements along the way.

On the other hand, if companies use SM to learn from their customers and address the root causes of their issues, the Customer Experience should improve over time and the number problems being mentioned should decrease.

Dove, who has received all sorts of kudos in the past for their unique approach to marketing, just interrupted my e-mail session with this popup.  Can you spot the problem here?  How about not being able to close the popup.  My only options are to click the “Print the Coupon” button which opens a new browser tab, or to click anywhere else on the popup which takes me to Dove’s site.  Both interrup what I am doing.  What’s worse is that when I close these tabs, i still have the damned popup sitting on top of my email with no way to get rid of it without refreshing my mail page.  That’s anoying!!!  Is this a new trend or just a bad implementation?  Am I just being too critical here??

Last week, I wrote a post comparing the Twitter presence of Circuit City and Comcast.  I was highly critical of Circuit City for not using the platform to reach out and connect directly with customers.  The very next day, a story broke about a PR debacle at Circuit City.  The first part of this story is a bit of a tragedy but it does have a happy ending, thanks to some fast thinking by a savvy PR guy.

The August issue of MAD magazine featured a four-page spoof tab for “Sucker City”.  The spoof included advertisements for items like HDTVs and video games, including the Nintendo Wii “Guaranteed In Stock … if you’re friends with an employee who hid it in the back for you. Otherwise, ooh, sorry, all sold out.”

In a panicky overreaction, Circuit City management instructed their stores to remove and destroy all copies of the issue (yes, you can get magazines at some Circuit City stores, but that’s a subject for different post).  Of course, the decision was another great example of how Circuit City doesn’t understand the new reality of operating in the age of social media.  A copy of the remove and destroy message quickly found its way to the Consumerist.com who shared it with the world.

That’s when PR guy Jim Babb stepped in to deal with the damage control.  As many of my readers know, I worked at Circuit City’s corporate headquarters and had the opportunity to know Jim and his extremely dry wit, so I’m not surprised with how he handled the issue.  Here’s an excerpt from Jim’s letter:

“As a gesture of our apology and deep respect for the folks at MAD Magazine, we are creating a cross-departmental task force to study the importance of humor in the corporate workplace and expect the resulting Powerpoint presentation to top out at least 300 pages, chock full of charts, graphs and company action plans.

In addition I have offered to send the MAD Magazine Editor a $20.00 Circuit City Gift Card, toward the purchase of a Nintendo Wii….if he can find one!

Comcast and Circuit City have many things in common.

Both companies sell products and services that deliver video and internet to American consumers.  They also share the dubious distinction of consistently scoring near the bottom of their respective industries in the American Consumer Satisfaction Index surveys (see here & here).

With limited competition, Comcast’s dismal rating doesn’t pose as great a risk to their future profitability as does Circuit City’s score, which is clearly reflected in their ever sinking stock price.  Over the last few years, Circuit City has not executed well at meeting customer expectations.  As a result, they have lost a big chunk of their base and aren’t attracting new customers as fast as the old ones are leaving.  Consumer Electronics retail is a commodity industry and customers can buy their CE products just about anywhere. Bringing customers back to Circuit City should be the company’s top priority.  Doing so will require a number of things, but consistently meeting or exceeding customer’s expectations would be a good place to start.

Another good place to start might be engaging with customers within their Social Media channels to better understand where the experience breaks down, and to offer unexpected support for problem resolution.  Interestingly, both companies are also getting involved with Social Media.  Circuit City maintains a blog on its website and both companies have started using Twitter; however, the ways in which they are using it couldn’t be farther apart.

Comcast has been receiving a significant amount of positive press from their use of Twitter. Frank Eliason, Comcast’s digital care manager and the man behind the Twitter account, comcastcares, tells me their   Twitter program started back in March ’08.  Using a number of monitoring tools, Frank and his small team listen to the stream of “Tweets” coming from Twitter looking for comments about Comcast.  When they encounter one, they immediately reply to the person who made the comment, usually asking if they can help.  As of this writing, comcastcares has made over 10,000 updates and has over 2700 followers.  They operate comcastcares like some kind of proactive help desk, contacting customers who have publicly shared that they are having a problem.

Think about that for a minute.

A company that is actively trying to address every complaint made about it on Twitter.  Every problem solved here equates to a customer whose expectations have been exceeded.  Those customers will are going to tell others about their great experience.  More importantly, by listening to its customers, Comcast is learning about the things that are getting in the way of a great customer experience.  It’s a feedback loop that can be used to drive improvements into their operational programs.

Circuit City on the other hand doesn’t seem to understand the basic concept here.  They established their Twitter account, Circuit_City, about the same time as Comcast, but roughly six months later, they haven’t even broken triple digits in Updates. Circuit City isn’t using Twitter to listen for and help frustrated customers or to find opportunities for improvement in their operational procedures.  Instead, they are treating Twitter (and their CityCenter blog) like any another advertising channel.  There is no conversation, just one-way messaging.  There is no “How Can I Help You?”, there’s just “Here’s some more stuff that you should buy”.   Most of the tweets are links to posts on their blog which is focused on products that Circuit City sells. 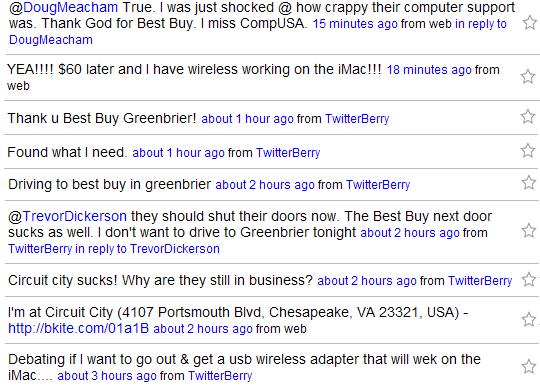 One could argue that Circuit City does not have as many detractors as Comcast, but there are clearly opportunities out there.

Earlier this week, I saw a Twitter user contemplating going to Circuit City to purchase a wireless card (see the accompanying Twitter thread).  When he tweeted “Circuit City sucks!  Why are they still in business?“, it would have been a great time for Circuit’s Twitter team to step in and try to salvage this experience.

Dr. Michael Wesch is the guy behind “The Machine is Us/ing us” video. His recent presentation to the Library of Congress entitled “An Anthropological Introduction to YouTube,” is now available on video. If you have seen any of Dr. Wesch’s other presentations, you know that he both deeply understands new media and its impact on the world’s cultures, and has a gift for communicating that understanding in compelling and engaging ways. This presentation is no exception.

Wesch points out that YouTube is much more than a technology. “It’s a social space built around video communication that is searchable, taggable and mashable,” Wesch says. “It is a space where identities, values and ideas are produced, reproduced, challenged and negotiated in new ways.”

Wesch covers a lot of ground in the hour long video. I’m not going to give a detailed summary here (I’ve included the time index from the YouTube page for reference below), but I highly recommend that you take some time (55 minutes 33 seconds to be exact) and watch it.  You’ll be glad you did!

You may also want to check out Gavin Heaton’s very insightful post about this video.

Here is the time index:

0:00 Introduction, YouTube’s Big Numbers
2:00 Numa Numa and the Celebration of Webcams
5:53 The Machine is Us/ing Us and the New Mediascape
12:16 Introducing our Research Team
12:56 Who is on YouTube?
13:25 What’s on Youtube? Charlie Bit My Finger, Soulja Boy, etc.
17:04 5% of vids are personal vlogs addressed to the YouTube community, Why?
17:30 YouTube in context. The loss of community and “networked individualism” (Wellman)
18:41 Cultural Inversion: individualism and community
19:15 Understanding new forms of community through Participant Observation
21:18 YouTube as a medium for community
23:00 Our first vlogs
25:00 The webcam: Everybody is watching where nobody is (“context collapse”)
26:05 Re-cognition and new forms of self-awareness (McLuhan)
27:58 The Anonymity of Watching YouTube: Haters and Lovers
29:53 Aesthetic Arrest
30:25 Connection without Constraint
32:35 Free Hugs: A hero for our mediated culture
34:02 YouTube Drama: Striving for popularity
34:55 An early star: emokid21ohio
36:55 YouTube’s Anthenticity Crisis: the story of LonelyGirl15
39:50 Reflections on Authenticity
41:54 Gaming the system / Exposing the System
43:37 Seriously Playful Participatory Media Culture (featuring Us by blimvisible: http://www.youtube.com/watch?v=_yxHKg…
47:32 Networked Production: The Collab. MadV’s “The Message” and the message of YouTube
49:29 Poem: The Little Glass Dot, The Eyes of the World
51:15 Conclusion by bnessel1973
52:50 Dedication and Credits (Our Numa Numa dance)